admin January 28, 2016 No Comments Crown Point IN, Gary IN, Indiana, Valparaiso IN

If mounds keep on appearing in your garden, there could be a lawn pest living in your property. Some residents ignore these land malformation. They think it's caused by nature. Only after seeing a pocket gopher or shrew mole running in their lawn, do the home owner started seeking the assistance of a wildlife company. Contact us today for your lawn pest removal and mole trapper needs in Schererville IN. We'll help you get rid of the mole. If there are other nuisance animals in your property, contact us too.
We have specialists on wildlife like ground hogs, lawn pests, beavers, woodchucks, rats, gophers, burrowing creatures, opossums, skunks, mice, bats, chipmunks, squirrel, birds, digging animals, raccoon, rodent species, snakes and other undomesticated species.

For mole trapping and wildlife removal in Schererville IN and communities in St. John Township in Lake County Indiana.

Mole trapper in Schererville IN

There are different sizes of the wildlife animal mole. Depending on the species,an average adult can have a length as much as twenty three centimeters, with the smallest at around seven centimeters. The shortest mole species discovered at this time is the New World mole which is just at the shade of three inches. The longest mole on the other hand is said to be the Scapanus genus which goes as long as nine inches. This wildlife animal is not as big compared to wildlife animals in the forest. It can only prey on small mice and worms. Moles are sometimes a favorite prey by wild birds like owls and eagles. 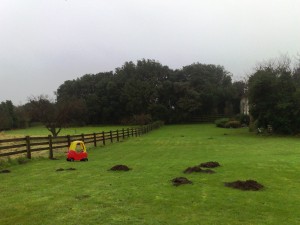 How do you stop the mole hills that seem to appear in your garden out of nowhere? It is interesting that some residents think of it as natural land occurrence. Only after they see black cylinder shaped five inch creature they realized there's a pest in their lawn. Some residents in Schererville even think of the pest as rodent. It's actually a mole. This is a wildlife animal that dig tunnels in lawn and fields, which pushes the soil to form mounds. If there are six to ten mole hills, it is done by a single mole. It is solitary and comes only in pair in the end of the winter season. You may need to use mole traps to eradicate this creature.

Mole removal professionals in Schererville IN

For inquiries on mole trapper and other Schererville IN wildlife removal services, call us at 219-464-7966